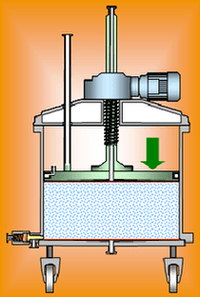 Refer to the technical notes to learn more about it.

Low pressure liquid chromatography process applications with packed bed usually provide the highest resolution. This is paramount for isocratic mode, and reduces the dilution of the product fractions.

The preparation of the media in the column depends on the application, industry and media used. The “packing” operation usually refers to the operation starting with media in slurry form and ending with a homogeneous chromatography bed between the 2 distributors in the column, qualified with HETP test.